Every few years, gaming enthusiasts around the world ask each other the same question – “Which console are you going for?” Gamers eagerly await the next time Sony and Microsoft release the details of their Next Gen console, clearly battling it out to take the top spot. Two generations ago, the Xbox 360 seemed to dominate the world of gaming when up against the PS3. This generation, it seems to be all about the PS4 while Xbox One lovers are fewer and far between. Next generation? It could be the turn of Microsoft all over again. But we think, they should do something far more exciting. These guys need to put down their swords, shake hands, and team up for the ultimate in gaming experiences. 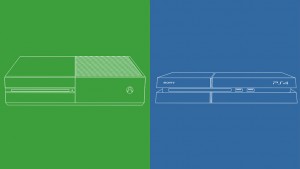 It’s been going on for longer than most real wars; we can’t remember a time when Sony and Microsoft weren’t competing against each other, to have the console that sells the most units. While Sony may have been one of the originals, with the Playstations, Microsoft was never really that far behind. By the battle of PS3 versus Xbox 360, it seemed as though Microsoft had truly caught up. Now, there are very few differences between the two consoles and competition is fierce. On the battlefield, their weapons come in the form of exclusives from big-name franchises. Xbox owners get Call of Duty map packs earlier than Playstation lovers. Sony have just announced Ratchet & Clank (a classic, by the way) will be exclusive to Playstation 4 owners. It all feels very much like two children waggling their fingers and shouting “nerrr, nerrr, nerr, nerr, nerrrr.” And it’s impacting the gamers, because now it’s becoming tougher than ever to play the games you love without having both consoles.

Give Peace a Chance

So imagine this… Sony and Microsoft agree to stop the war with each other, in order to keep those civilian casualties down. We, the gamers, are the civilians by the way. And our banks accounts are becoming the casualties, when having to fork out for both consoles every New Gen. The two companies set aside their differences and make peace, in honour of the gamers. Together, they create a super console. Imagine what having two incredible sets of researchers and developers could do for a console. Combining the latest and greatest technology (virtual reality, for example) to create the most advanced gaming console of all time. By combining two great forces, this epic super console could have the best graphics in the world; it could have the fastest processor ever seen in the gaming world (and even contend with PC gaming; they could even work on how ‘green’ and economoical it is to run. There are so many things that these two companies could work on together, to make a super console. Plus, they do say two heads are better than one. We’re thinking, the Mison. Like the bison, get it? A real beast of a console, roaming the Great Plains of the gaming world and dominating the heck out of it. Yeah, we can see it now.

Look, we know that there’s a million reasons why these two companies would never hold hands and bring out the Mison. Unfortunately. There will be arguments over profits (just split it down the middle guys) and who did what. We’d be back in the playground again. But the benefits for the gaming world would be incredible. It could even open up a space for a newer, independent console to gain some recognition. No, we don’t mean that new Nintendo abomination. Each side of the company could focus on the games they know and love – which means no more ‘exclusives’, thankfully – while also opening up the platform to indie game developers. It would be gaming heaven, for everyone involved. No more having to wait an extra month for the next map pack, when your buddy has been telling you all about it. No more feeling downtrodden when you’re the only one of your mates with the ‘other console’. No more spending a fortune buying both consoles, just so you can get hold of those exclusives.

So Sony and Microsoft, listen to our pleas. We’ve even done the hard work for you by naming it. You just need to shake hands, get over your differences, and bring us the Mison. For the love of gaming and gamers all around the globe… Just imagine how incredible this would be, although the chances of it happening are slimmer than the old PS2.