Two anonymous American women started an Instagram account that is nearing 80,000 followers. That is not necessarily a big surprise, neither is the fact that their account features photoshopped pictures of a barbie doll, rather than duck faces, cute kittens or sunsets. What the account is doing, however, is holding up a mirror to the Western industry of volunteering that has developed in the past decades.

The account is run under the name Barbie Savior and features the namesake’s adventures as an exaggerated volunteer in the “country of Africa.” While the two founders are aware that Africa is a continent rather than a country, Barbie Savior is not and she is blatantly unaware of the many problems that Western volunteering in Africa entails. 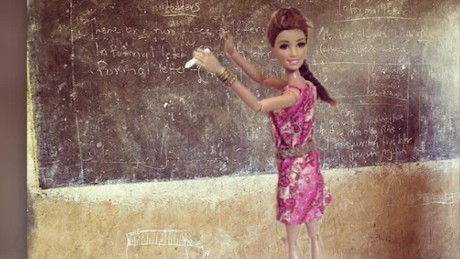 The two great minds behind the project – though many may disagree with that assessment – themselves volunteered and worked abroad for many years and initially began their journey just as unaware as those they now criticize. But throughout the years and after experiencing more and more troubling issues, their mindsets have changed.

It should be noted that they are not against volunteer work per se. Like many, they do agree that help is needed and often appreciated, but that there are certain standards and mindsets that need to be maintained and accepted.

For example, that aid workers and volunteers should not act differently abroad than at home. In an email conversation with the BBC they mentioned the example that a nurse in the United States needs to respect their patient’s privacy, yet many do not consider it unethical to post pictures of their patients to their social media accounts, often peppering them with emotional and inappropriate comments about how hard their lives are.

“Voluntourism” is a growing market and an estimate from 2008 showed that over one and a half million volunteer tourists go to countries – nay, continents – like Africa and spend about two billion dollars on this.

Some Westerners choose to work in big NGOs but more and more are choosing the option of spending their holidays volunteering, ostensibly doing good but often showing no respect for the country and its people. The number of opportunities to do so is growing, with one website alone featuring over 1,600 volunteering options in Africa.

One of the main issues the creators of Barbie Savior have is that Westerners with little to no experience in a field can come to Africa and work in this field that they are objectively unqualified for – other than by the simple fact that they are Westerners. Too many still consider themselves inherently more qualified than their African counterparts, even if they are working together with actual experts in the field.

For example, many volunteering opportunities allow Westerners to teach at schools, without being trained teachers. Nor do these volunteers have any development experience, other than having signed up for a programme.

Critics of voluntourism say that this kind of volunteer work is a symptom of a colonial mindset or the White Savior complex, some go so far and say that volunteering on this scale makes it near impossible for African countries to stop relying on foreign assistance and start developing new strategies themselves.

The two women behind Barbie Savior by no means claim to have the answer to the question. What they do expect – and it appears that rightfully so – is that their Instagram account will lead to a much needed discussion about the project.

Greg Bows, the managing director of African Impact, one organisation that offers volunteer experiences in Africa, seems to approve of the account. While he insists that his organisation does not support the criticized kind of volunteering, he did admit that some volunteers come with that mindset and that there are organisations that are not very strict about this issue. He has, so he says, taken to using some of Barbie Savior’s pictures when he instructs new volunteers about the programme.