The U.S Air Force is said to be reviewing the future of their air-support aircraft, a position that is currently undertaken by the A-10 Warthog, which made its first light in 1975.

The deputy chief of staff of strategic plans and requirements, Lt. Gen. Mike Holmes, stated that currently the team are building draft requirement documents for a close air-support airplane. Holmes went on to state that the Air Force would use combat requirements in order to determine the type of aircraft that would best suit their needs. The options may include building a new dedicated aircraft from an existing craft or extending the life of the A-10.

The original plan was for the version of the F-35 Joint Strike Fighter to replace the A-10 Warthog, however the F-35 project has been continually delayed and mounting costs, and with the demands being made by the ISIS mission it has meant that the Pentagon have had to reconsider their plans in the 2017 budget.

Ash Carter, the Secretary of Defense announced in February that the next budget would extend the lifespan of the A-10 and defer any retirement plans until 2022, when they planned for it to be replaced with the F-35. However, the recent revelations from Holmes’ indicates that the Air Force is considering other replacement options.

The A-10 is the only airplane that the Air Force has which is designed for the task of close air support, unlike the multi-functional F-35 and it is the A-10 that has been so important in the fighting against ISIS. The A-10 has been used in combat in Afghanistan, Iraq and recently Syria where it has been able to target the enemy close up without risking casualties as the pilots are able to fly sow enough to distinguish between friendly forces and the enemy.

The A-10 has the capacity to carry 6,000 pounds of missiles and bombs and is also armed with a 30 mm, seven-barrel Gatling gun, which is able to fire uranium bullets at 3,900 rounds per minute. Holmes did add that the Air Force are currently trying to refine exactly what it is that they need and a key consideration for the future of the close air-support aircrafts was the affordability. The proposed replacement in the form of the F-35 is said to have a projected cost in the region of $135 million per plane, whilst the A-10 has a cost of just $18.8 million per unit.

Holmes did say that a possible replacement could be type of craft that is already in production such as the A-29 Super Tucano and AT-6 Wolverine. However, Holmes also said that a final decision is a way off and that it will be the future budgets that will determine the future of what the close air-support aircraft will look like.

In 1949, Picatinny Arsenal was given the job of creating a nuclear artillery piece, the engineer Robert Schwartz, created the original designs, and came up with the scaled up the 240mm shell and made use of the German K5 railroad gun as the way of exit for the carriage. The design was then approved by the Pentagon, mainly due to the interaction of the Chief of the Ballistics Section, Samuel Feltman. From this point a three-year plan was put into action and saw the project making the right progress to quickly produce the demonstration model which participated in the inaugural parade of Dwight Eisenhower’s in January 1953. 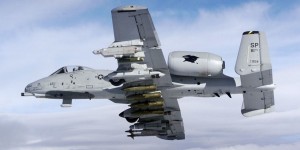 The Atomic Cannon went on to be tested in Nevada in the May of 1953, and was part of the series of nuclear tests known as the Upshot-Knothole. The test was successful and managed to detonate a W9 warhead at a 7 mile rang. This was the only nuclear shell to be fired from a cannon. Following on from the successful test a further 20 cannons were made at Watervliet and Watertown Arsenals and cost $800,000 each.

Due to the size and limitations of the M65 Atomic Canon it soon became obsolete but did remain a prestige weapon until 1963 when it was official retired. There are at least 7 M65s on display as well as the prototype however the majority are no longer equipped with their prime movers.

You Could Soon Play Playstation Games on Your Xbox One
Is Virtual Reality Just a Fad for the Bored Generation?